THIS WAS WRITTEN ABOUT 2 MONTHS AGO BUT, AS USUAL, NOT POSTED.

It’s Friday Night, and the back room is open for action. In previous blogsplats, I’ve whittered on about records that are going to rock our club, 69.. and then when I look back, realise that I never even played them. Well some anyway 🙂 . Here’s a link to a wee bit of what actually was played the other week..

here
So, tonight we are mainly listening to some up-fronters. A few hot wee promos that have come my way. Tomorrows music today!  …and all vinyl of course.

Sound Signature 047. Theo Parrish, famed for his House, but I just love it when he throws the curveball, and releases some rough as baws Techno. This one is by Theo and Pirahnahead with Craig Huckaby, Mike’s brutha. Should be released soon.. which could be weeks, or maybe more, who knows. We’re rocking on Theo time. He also sent a promo of SS045 – Any Other Styles.. to be released later this year… so I’ll probably have that for far too long before anyone else. Sorry about that… and it’s Pure Theo House.

While we’re on the subject of Detroit House, I should perhaps mention, the ‘In The Dark’ compilation, that I just received the vinyl TP’s today. Tracks by Rick Wilhite, M.Pittman, KDJ, Mike Huckaby, Delano Smith, Keith Worthy, Malik Alston and Ray Bone Jones. In The Dark – The Soul of Detroit, is coming as a double LP, and CD with DVD of a film ‘Voices’, which I’ve just checked a bit of as well.. and looks a good informative view of what’s happening in the D.. well in 2005.. but it’s some good interviews with some guys you won’t see anywhere else waxing about what they do and love. There was footage of one of the party’s, and I was just thinking.. it’s just like ’69 wi windy’s’. To explain a bit.. ‘It’s just our club night in Paisley called 69.. with windows’.. as opposed to the dingy wee basement that it is. But then it’s not all about the natural light is it. I did like a comment from Rick The Godson.. not sure who his Godfather is.. will need to ask him.. but, he was saying that it’s all about the system and the dancefloor, and that it’s always different for him. I always think that about 69.. it’s different every time. If it wasn’t like that I wouldn’t still be doing it, but it just is.. and The Godson seems like a man after my own heart there. Marty ‘The Godcousin’ McKay.

Anyway, you should buy the vinyl, cos it’s the best, the CD cos it’s got extra tracks, and the DVD (which will come with the CD anyway), cos it’s got the chat, and the natural light-enment.

There’s a lot of white labels kicking about here this week.. was getting confused there. That might not be the white labels fault right enough. I was just rotating another on the deck, and caught up in yon Detroit House, which is understandable, as was the new Madteo remixes, and was Marcellus Pittman remix, but flipping, and perhaps coming to the tune of the night.. the Shake Remix. Waaooo.. Shake seldom disappoints. Probably one of the only guys that you can still just buy his records on sight.

Probably the tune of last week, that’s now rockin the back room, was MMM’s mix of Tshetsha Boy’s on Honest Jons. Just when you thought there was too many remixes coming out on this series to listen to.. then this bomb drops. Think singing and raving in the shower. Well maybe not.. but you should enjoy it whatever you’re up to.

Moving into the future.. I’m not sure I should be mentioning his one.. as the guys don’t want it announced until ready for release. No pre sales, keep it quiet until vinyl is ready to ship.. but fuck it.. nobody’s going to be reading this really, apart from you.. and one or two others. SUNKLOTUU, new Boddika and Joy Orbison..  TP was road tested at 69 last weekend, and the Dun Dun track went off. So it’s good to go.. good enough for Paisley, then good enough for the rest of the world. Keep your eye on the site.. as I say, won’t be announced. Get it when you can. (I’d say 2 to 3 weeks, but don’t go telling anyone, or everybody will want one).

ED – It’s actually available this Tuesday! Or sold out.

Anyway, enough of that future beat jargon.. It’s like Tomorrow’s World in here tonight.. in fact it IS Tomorrow’s World.. and I’m in it !! …Ahh, it’s actually today’s world.. so all cool. Where was I.. talking shite, that’s right.. I better be signing off.. with a wee mention for the new Metroplex 12. Only available at a few stores in the world, there are 200 copies, and all numbered with individual artwork.. well sleeves printed and hand painted by Kimyon the artist.. recording, and painter.. and decorator… wonder if he’ll do my living room actually.. but I can only think he got the inspiration for his sleeves from my Halloween costume…. 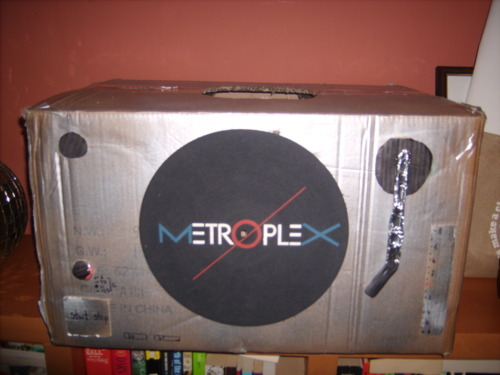