Well it’s Rubadub’s 20th Anniversary Birthday bash this Sat, 24th Nov. There may be a few tickets left, if you phone the shop.. but I doubt it.

I’ve been trying to find some of those classic records that have made their mark with us in the last 20 years. Far too difficult a task, if you’ve got your records filed in the order I have.

The first record I need to find is Wladimir M’s Goin’ South. (Eevolute002). Got a few copies. I have one here that sounds terrible, as if DJ Hedgehog has been spinning it when I’ve been out. It’s been an anthem from the very first nights of 69.

I’m going to digress a bit here into Techno-storydom..

While our shop was in Virginia Galleries, there was a chap looking through the records. I said, ‘Can I help you big man’. He said, “Oh I see you have Eevolute Records here.. I have recorded for Eevolute. My name is Wladimir’. ..I nearly fell on my arse.. what like Vladimir the Impaler with a ‘W’ ? ..Then told him how much we loved his records. He didn’t have any clue as too how much though. He’d really need to have been to 69 I suppose for that.

Anyway.. no more Techno stories this blog. Just records, that may, or may not get played.

I’ve been a bit demented trying to find EFF’s 420 Low.. which I can’t, amongst others.

I also need to Find EPY, MMM, EOG, DSR, (and some other capital lettered artists) Erik Travis, Lory D, G2G, which I’ve just found, well half of it.. and Journey to the Dragons has got to be played. Jazz Is the Teacher.. and maybe a few other Detroit Classics.

Octave One Foundation is in the bag, and Optic Nerve – Trilogy Wave 3, Sonar 123, H-Men Scream.. which is from Chicago.. but hang on I feel another Detroit Techno story coming on..

Tank – Bite before you bark (Ignitor003) .. is a bit of a favourite of mine. I never tire of listening to it, and when played is often asked by appreciators in the crowd ‘What the fuck is that’. None more so than when we had UR playing at the club, and I was spinning post the live set, and couple of the band members came up and asked.. ‘Who the fuck is that’. ‘His Dug’ I said, pointing to Mike. Tank. Mad Mikes dog. Wee Bull terrier. Forever immortalised in music. Via Orlando Voorn.

Anyway, I was going to wax about records, and list some, and there’s loads of brilliant labels, that I’ve just pulled out there… that really deserve a mention here, because they have played a major part in our musical history.. but fuck that, I need to put some records in my bag for tomorrow. It’s a wonder anyone gets anything done with this internet shit.

I’m actually listening to some new records right now. As I said to a guy in the shop today.. we’ll be rocking the old school, and I wouldn’t be playing any new cutting edge promo white label, sorta shit. But I may make an couple of exceptions. Dan’s new DABJ-1204, is a 69 belter, and a certain NY label that I’m not allowed to tell anyone about, until it’s released in about a week or two, but I just can’t help myself. And no one really reads my blogs anyway. If you’ve read this far, then you deserve to know. NS-07. New Novel Sound. Levon Vincent. Rockin in there with some of the best records in the last 20 years. It would be a shame if it was just a week too late.

So I’ve got about 4 records in my bag, and got a wedding and a birthday party to go to tomorrow, so that’s about it for this BRBE… I better go and hone my skills. How time flies, eh? It’s been 20 years since Rubadub first opened it’s doors to start supplying all you good people with the very best in underground, electronic music (and latterly, equipment) and I think it would be fair to say that it’s not been without it’s ups and downs but, on the whole, it’s been an incredible 20 years.

As most of you will no doubt expect, we are having a little party to celebrate our 20 years. In true Rubadub style, we’ve decided to sling the superstar guests and fancy-shmancy venues and do it the way we did back in the beginning. We’re going back to where it began, the best little basement this side of Paisley…. 69.

It’s going to be an intimate night, filled with the finest music of Rubadub’s history supplied by the guys who’ve been buying and selling you the best cuts available since 1992 and beyond!

We will also be partying all-day-long at the shop on Howard Street and we will have special deals on equipment and records plus special guests in-store DJing and playing live… more on that to follow very soon!

We would love it if as many of you as possible could come and join us to help us with the celebrations. All are welcome as always! 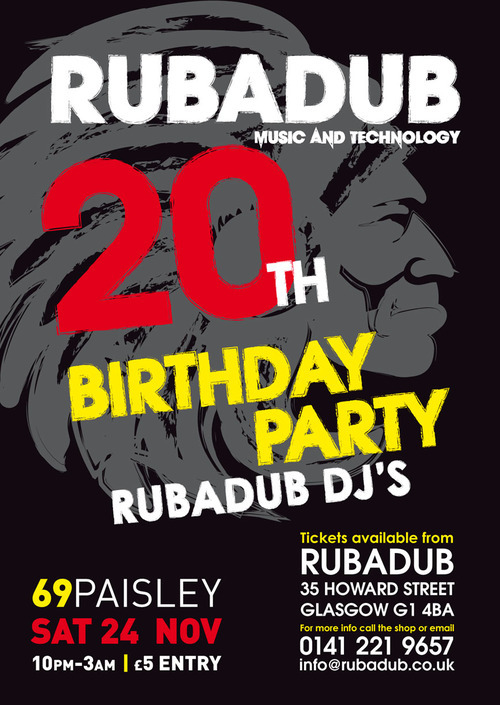 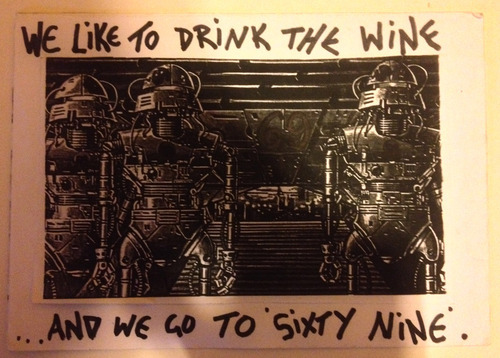 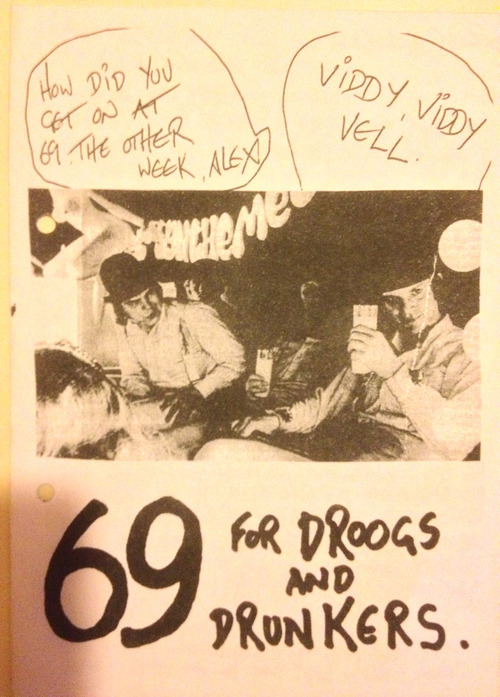 It’s been a while.. much longer than usual, but it’s time for another back room blog action.

I’ve been mostly doing weddings, birthday parties, silent disco’s (at weddings), and the likes in the past while.. so I won’t bore you with the records I was playing there.. well I might one day… as I never seem to get bored of them 🙂

I have also been away in NYC, and still a bit jetlagged I think, even though it was about 3 weeks ago. My first time there. It’s just like you see on the films. Taking of Pelham 123. Well we spent most of the time on the subway.. but when we did pop up overground we happed upon some interesting musical excursions. Coney Island.. where you had guys set up with their sound system on the boardwalk, belting out some quality NY House, akin the P Garage and Spiritual Records sorta vibe. Maybe about 20 dudes having a dance.. people out walking the dog, and some characters that haven’t stopped dancing since the 70’s. Best thing was, we were the youngest folk there. You wouldn’t get away with this in Saltcoats, without getting jailed or slashed.

Then we boogied on on the F train, up to the Mister Sunday party. Open air, decks uncovered, lights on the trees, food on the go, and even better NY house music.. and maybe few bits from Chicago in there as well. I couldn’t help but think.. if this was in Glasgow… would be waaay different. Don’t think I have to elaborate further. But I will.. Carnagerous I think is the word. Justin, Eamonn and Anthony and crew have releasing under the Mister Saturday Night label..

only 2 releases to date, but watch out for the 3rd soon.. by Anthony Naples, and there’s some other forthcoming belters by the Justin Timberlake look a like (without the millions), New Yorker. but he’s on the up. Check him out. NY is a bit of a hotbed of recent, with a plethora of labels rocking out from there these days, inc The Corner, Discovery, Mister Saturday Night, subBASSSS, Deconstruct, Love Revolution, Strength Music etc etc.. and of course Novel Sound, and the L.I.E.S. imprint… That’s provided they’ve not been wiped off the face of the earth by recent super storms !..I’ve been walking out my front door the last few days, into the freezing, horizontal rain, thinking ‘this aint so bad’.

Forthcoming Techno Point of note – Further delay on the Deepchord LP’s.. that have an insert with artwork, and photograph.. (that are framable).. well would be if the printers weren’t in New Jersey. We fear the worst. I’m sure I saw them flying down the boardwalk on the news the other night. Anyway, we’re sorting out.. and will be out soon.

What was I saying.. oh aye records that I was going to play at club.. last week. Got lost in a  Back Room Boogie Time warp there.. next thing you know it’s the next Friday. So aye, this blog shit is meant to be about the records I’m listening to right now in my back room, and not talking shite…

Now I’m listening to.. Jeedo – Chaos / Scorpio (DTR), Tuff Sherm (The Trilogy Tapes), Legowelt – The Paranormal Soul (CJFD LP), MK on UTTU… over house, and Well Rounded Housing Project 7, and the other Well Rounded white I got today. Sounding good.. I feel a rant coming on…

Somehow managed to surpress that rant.. or more likely just caked it, as it’s now next Friday, and it’s time for another Back Room Boogie Experiment. Since we  have a birthday party coming up, then I may be listening to a few of the tunes I’m likely to play there. Whether I actually blog about them is another kettle of fish. So like buses.. wait for ages, and two come at once. Or maybe even three. If you’re very unlucky.